An attorney in her native Sierra Leone, Ms. Atiba-Davies prosecuted a failed coup leader, only to become his number-one target when he later escaped from prison and came to power with the help of a rebel guerilla army. Forced to flee the country, separated from her children, and seeking asylum, she overcame unthinkable adversity by finding and building incredible resilience.

Today, she is a powerful advocate for victims and has dedicated her career to giving them a voice – first as Principal State Counsel in Sierra Leone; then in Gambia as Deputy Director of the Office of the Public Prosecutor; and later as the Victims Expert for the International Criminal Court (ICC) in The Hague leading its Gender and Children Unit.

In this very special event, Ms. Atiba-Davies was interviewed by her daughter-in-law, GDIT Senior Marketing Manager, Britney Ambers. Their meaningful and moving discussion touched on the power of resiliency, finding strength you didn’t know you had, and the ways in which overcoming adversity can helps us empathize and advocate for others who are struggling. 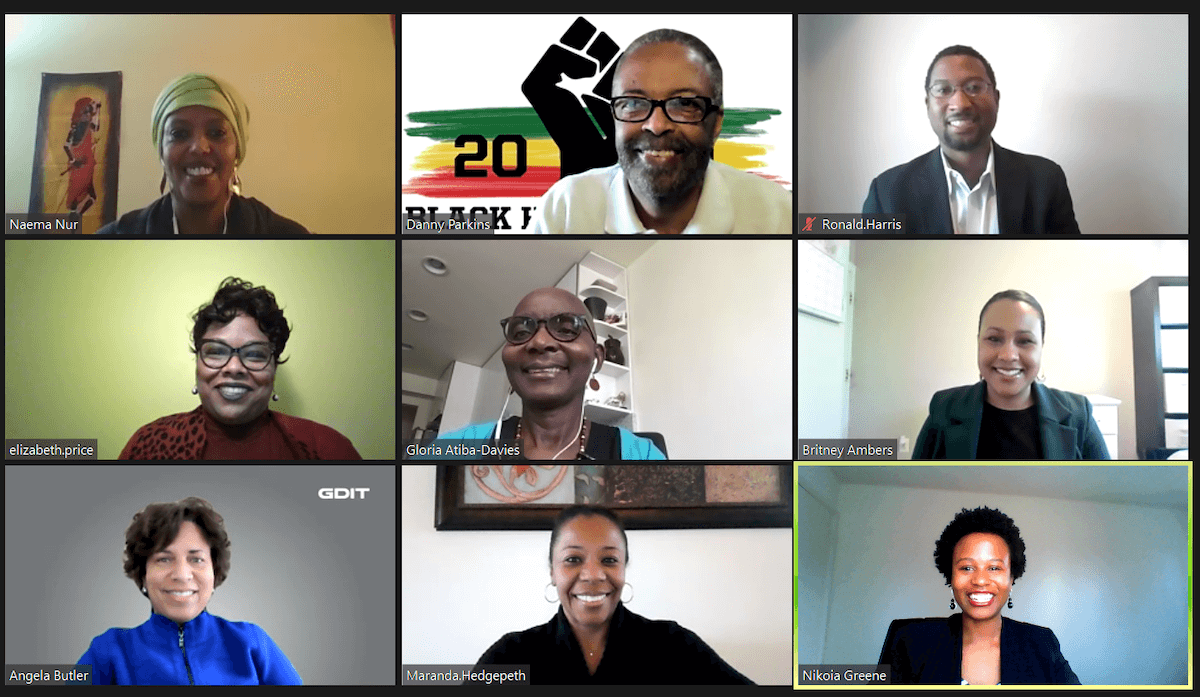 Asked about how she made it through difficult times, Ms. Atiba-Davies pointed to her “solid foundation” and the belief that life happens in seasons, with each one presenting opportunities and challenges. She told the group that your attitude and the support you have is what gets you through. It links with your character and how you approach things.

“What kept me grounded was the belief that I was doing the right thing,” she said. She told the group that it was critical to keep focused; to be sure of what you want and the outcome you want to achieve, and then working – hard – for it. “Life is never a bed of roses,” she said. “Keep your eyes on the end-goal to make sure you’re not distracted or discouraged.”

Asked about why it was so important to give victims a voice, as Ms. Atiba-Davies expressed her belief that, in every court case in every jurisdiction, victims should be front and center, not passive participants.

“They’re the ones who’ve suffered,” she said, explaining that victims should have the ability to say where, when, and to whom they want to testify. “They went through trauma and they have to relive it when they testify.”

Asked why it’s so important that no one is above the law, Ms. Atiba-Davies quoted New York Attorney General Letitia James who said, “Everyone should be accountable, regardless of their status, regardless of their power.” She then recalled how, at the ICC, no one has immunity – not presidents, prime ministers, or the most powerful warlords. “Those who are at the top should be held to a higher standard by virtue of their position,” she said. “They called the shots – and if you called shots that are criminal or invite criminal liability – I don’t see why you should be protected by your position. The Declaration of Independence says all men are created equal and until yesterday when I checked, they haven’t revised it.”

Asked how the challenges in her life had impacted her faith, she said they’d made it stronger and brought her closer to her faith. “It started because of the serious reflection I had on life after what happened [in Sierra Leone] in 1997. I come from a simple family but somehow, I have always found myself in positions of the limelight. Starting from school awards – to becoming a lawyer and being involved in high profile cases – that brought a false sense of ‘I can do it all; I’m it’ – but when the coup took place and things happened the way they did I was forced to reflect. And that sober reflection – I thank God – made me realize I am not in control, like I thought I was.”

She went on to explain that once she realized she was not in control, she had to dig deeper, ask questions, meditate, and pray to come to the conclusion that it’s only one’s faith in God that can help you in good times and keep you grounded in dark times.

As an example, Ms. Atiba-Davies recalled how, in 2001, she applied for a job at the Legal Affairs division at the Port Authority in New York. She was offered a position as Deputy to the Head of the Department but by some twist of fate, the offer was withdrawn. The position had been created because a staff member had resigned, but then withdrew her resignation. “That withdrawal of my offer was what saved me from reporting for duty on the 36th floor of Tower 1 of the World Trade Center, starting on the 10th of September. 9/11 was the next day. So, in it all, I am happy I am not in control because if I were, I would have been in that position when the towers came down.”

Asked about advice she’d give to everyone, dealing with all that 2020 gave us (and that 2021 continues to dole out), she said, “Develop your character.” She then went on to say that she operates with three C’s in mind: character, courage, and commitment. When you’re developing your character, you’re working on things like honesty, integrity, and competence, she said. When it comes to developing your courage, she said hers was developed by being aware of the fact that she’s not in control and faith is the bedrock of that. And commitment is all about your belief in what you’re doing or want to do.

Asked about why it’s especially important for women of color not to give up on their dreams or career aspirations she said, simply, “We don’t have any choice.” She told the group to be open to, in some cases, not giving up on your goals but maybe suspending them. “Maybe you put them on hold – and that was part of my journey,” she said. She told the group about how she was so disappointed when she came to America and wanted to practice law but learned she’d first have to get an undergraduate degree, then go to law school, then take the bar. “That was out of the question,” she said, “I had children to feed, children to support!” So, she instead put her interests to one side and focused on raising her children. “Sometimes you have to sacrifice and make sure that it’s for the greater good.
The sacrifice of doing that, in my mind, was for their good.”

Of course, Ms. Atiba-Davies found immense success as an advocate for victims, though she was no longer practicing law. “You know there’s something you’re working for; you’re becoming more prepared to get to the next level. So, you should never be daunted by people who encourage you to give it up or try something else. You’re the best person to make that decision but be real with yourself. Don’t pursue false hopes or dreams so you can be in competition with someone. Let it come from within. You know your ability. You know what’s inside of you, so hold on to that and let the best come out of it,” she said.

Asked about finding the strength to persevere, knowing she could be prosecuted or even killed, she said, “Somebody has to do what’s right; and if it has to be me, so be it.”

A pretty incredible way to end the conversation and the session. Thank you for your time and insights, Ms. Atiba-Davies. We are in awe and so inspired by you!

How One GDIT Engineer Is Helping Students Find Their Career Paths

Inspiring the Next Generation of STEM Leaders